Want to be Happy? Take a Lesson From Jewish Tradition 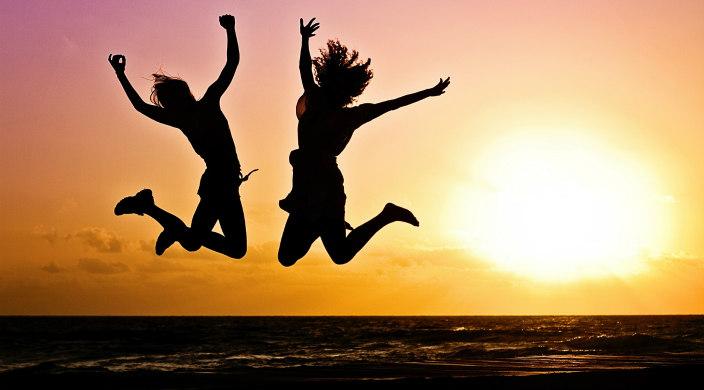 Two people in total shadow jumping on the beach with sunlight behind them
Before my dad ever put our Buick station wagon into gear – whether we were heading off on vacation, to take the SATs, or have wisdom teeth extracted – he would turn to face whomever was in the back seat. In a voice reminiscent of Ted Lewis, the 1920s jazz band leader (born Theodore Friedman in 1892), he would ask Lewis’ famous question: “Is everybody happy?” He wouldn’t budge until we had dutifully responded that we were.

A recent New York Times article about happiness and the immune system reminded me of my dad’s signature question, and confirmed that he was on to something. It appears that being in a positive state of mind when receiving a flu vaccine significantly boosts immune response. Happiness, then, not only offers pleasurable sensations to individuals and those around them, but also can be good for health.

Much writing and discussion in Jewish texts focuses on happiness and professionals in this field (yes, happiness experts do exist) might agree that we make our lives better (and ourselves happier) by striving to be good people, by helping others, and by creating and maintaining meaningful relationships. The Hebrew language – which is notoriously economical – boasts numerous, albeit subtly different, words for joy: simchah, gila, sasson, and rina. And finally, the Jewish calendar, too, offers us the recently-ended harvest festival of Sukkot, that not only ushers in Israel’s much needed rainy season, but also is known as z’man simchateinu – the season of our joy.

What follows this season of joy is the Hebrew month of Cheshvan, which begins this evening and sometimes is referred to as mar Cheshvan (bitter Cheshvan) because of its dearth of Jewish holidays other than Shabbat. With a harvest safely tucked in and our Torah scrolls returned to their everyday garb, it’s back to business as usual in the synagogue and in our lives. Today, that often means we worry about friends and family affected by hurricanes, earthquakes, and wildfires. We mourn for victims of senseless gun violence. We’re anxious about healthcare – for ourselves, the people we love, and those who lack it entirely. The list goes on.

Just as Ted Lewis, seeking to encourage positivity in audiences mired in the unemployment, poverty, uncertainty, and fear of the Great Depression asked if everyone was happy, so, too, has our Jewish tradition – winking, smiling, and prodding – just asked us the very same question. Even as my brother, sisters, and I sometimes rolled our eyes at the question, we always answered, “Yes, Dad, everybody’s happy,” forgetting, just for a moment, our worries and trepidations. “Yes, we’re happy, Dad. Let’s go.”

This Cheshvan – and throughout the year – we can learn a lot from the optimism of Ted Lewis, my dad, and our Jewish tradition. Doing so just might boost our immune systems, help us appreciate the joy of simple pleasures in our lives, and give us strength to oppose the ills that plague our world.