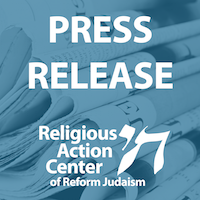 WASHINGTON – In response to President Trump’s announcement that he will not certify Iran’s compliance with the 2015 Joint Comprehensive Plan of Action (JCPOA) nuclear agreement, Rabbi Jonah Dov Pesner, Director of the Religious Action Center of Reform Judaism, issued the following statement on behalf of the Union for Reform Judaism, the Central Conference of American Rabbis, and the wider Reform Movement.

“President Trump’s decision not to certify Iran’s compliance with the JCPOA is a poor and destabilizing choice that makes our world less, rather than more, secure. There is no question that when the Iran deal was initially presented, our Movement had serious concerns about the agreement’s ability to positively impact deterrence, Iran’s support of terror, inspections, human rights and religious freedom, and the United States’ standing in the world. However, at this point in the deal’s implementation, our shared global task is to ensure the JCPOA’s success. Unfortunately, President Trump’s decision undermines that effort.

“As an array of U.S. and Israeli national security experts, from former Prime Minister Ehud Barak to Defense Secretary James N. Mattis, have attested, to unravel or destabilize the deal and the verification that accompanies it is to make the world less safe. Such a step is confusing – something no nuclear agreement should ever be. At the same time, real concerns about Iran’s activities, from human rights violations to conventional weapons proliferation and beyond, should be addressed through other means, rather than opening up the delicate JCPOA.

“We urge Congress to act to promote the strength of the JCPOA and ensure the United States’, Israel’s, and the world’s safety from Iran’s nuclear program.”

The Religious Action Center of Reform Judaism is the Washington office of the Union for Reform Judaism, whose more than 900 congregations across North America encompass 1.5 million Reform Jews, and the Central Conference of American Rabbis, whose membership includes more than 2,000 Reform rabbis. Visit www.rac.org for more.