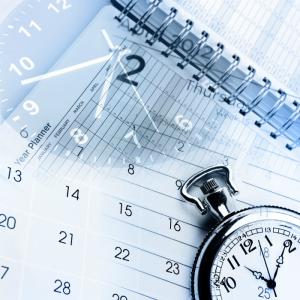 (Note: The information in this post applies to the holidays of Pesach, Shavuot, Sukkot, and Sh’mini Atzeret, but not to Rosh HaShanah. Rosh HaShanah has a different set of issues that would require a whole separate article to explain.)

When does Passover (Pesach) end? Why do some calendars say it ends after seven days and others after eight? The answer in most Reform Jewish communities is seven days, but the history is complicated.

The festival calendar in the Torah is clear: Pesach begins on the 15th of Nisan and lasts for seven days, and the first and seventh days are what we would now call yom tov, a day off from work. On the first night, there is a seder, with matzah, maror, and the retelling of the Exodus.

Back when the months of the Jewish calendar were determined by observations of the new crescent moon, eyewitnesses would bring their testimony to the rabbinical court in Jerusalem, and the court would sanctify the new month based on this testimony. Since a lunar month is about 29 ½ days, a Hebrew month (which has to have a whole number of days) can have either 29 or 30 days. So the court then had to get the word out to the rest of the Jewish world about which day had been declared the first of the month, so that everyone could observe the holidays on the same day. Originally this was done by signal fires (as in The Lord of the Rings), which transmitted the message rapidly. But then the Cutheans, a sect opposed to the rabbis, launched the first phishing scam and made signal fires on the wrong days to throw people off.

Since this method of transmission was no longer secure, the rabbis started sending messengers to outlying Jewish communities to deliver the message in person. This was harder to forge, but much slower. Locations within two weeks’ travel of Jerusalem (such as other cities in Israel) had no problem, since the holiday (Pesach or Sukkot) began on the 15thof the month, so they would receive the message in time for the holiday. But faraway communities such as Babylonia (modern Iraq) couldn’t get the message in time, and didn’t know when the new month had begun, though they could narrow the possibilities to two days. So to play it safe, they started observing each yom tov for two days, so that one of the days would be the correct date of the holiday (as determined in Jerusalem). In the case of Pesach, this meant that yom tov was not only the first and seventh day, but was now the first, second, seventh, and eighth days, so Pesach became an eight-day holiday.

Up to the present time, all Jewish streams in Israel (liberal, Orthodox, and secular) follow the Torah’s calendar and observe each yom tov for one day (and Pesach for seven days). But outside of Israel, the two-day (eight-day) custom stuck. In the fourth century, we switched over to a calendar that is based on mathematical computations rather than astronomical observations, so that the calendar can be computed anywhere in the world and the original reason for the extra day no longer applied. But the Babylonian Talmud (Beitzah 4b) advises Diaspora Jews to maintain minhag avoteichem (“the custom of your ancestors”) and continue the practice of two-day yom tov, in case the knowledge of how to calculate the calendar is forgotten some day.

Fast forward to 1846. A group of European rabbis convened in Breslau to debate various reforms to Judaism. They concluded that “The second days of the holidays … have no longer any significance for our time according to our religious sources … Therefore, if any congregations abolish some or all of these second days, they … are thoroughly justified in their act.” These rabbis saw themselves as representing the entire Jewish people, but of course, Reform Judaism eventually became just one of several modern denominations. And within the Reform Movement, one-day yom tov became the standard practice, whether in Israel or anywhere else. Enough time has passed that this has become our own minhag avoteinu; as a seventh-generation Reform Jew, I am proud to inherit this tradition from my family.

The other modern Jewish movements (outside Israel) have taken different approaches. In the1960s, the Conservative movement ruled that individual rabbis were authorized to choose one-day or two-day yom tov for their communities; however, the vast majority of Conservative congregations recognize two days. The Reconstructionist movement also gives congregations the choice, and most Reconstructionist congregations do one day. In the Orthodox world, two days are standard, with the exception of some Israeli expats who maintain their one-day practice even outside Israel.

So the answer is that in Israel and for most Reform Jews around the world, Pesach is seven days, but for many other Jews (including the ones who seem to print most calendars), it is eight days.

What to do about seder? Many Reform Jews do seders on the first two nights of Pesach, even though they don’t consider the second day of Pesach to be yom tov. Is that ok?

There’s certainly nothing wrong with having a festive dinner with family and friends, singing songs, and discussing the Exodus, even if it is not yom tov. We could do that all seven nights if we wanted (though that would be a lot of cooking!). (However, those who want to be careful about these things should perhaps leave out certain blessings such as kiddush. The blog Mah Rabu has a guide to this situation.)

But maybe Reform Jews should consider introducing a new tradition: holding the “second seder” on the seventh night, when everyone agrees that it is yom tov. This has a number of advantages in addition to consistency with our festival calendar: spacing out the seders provides more time to breathe in between, and creates something climactic to look forward to at the end of the week (besides pizza). In an era when many of us have families spread across the continent, this schedule makes it easier to travel and have seders with both sides of the family, or one seder with relatives in another city and the other seder with our local community. The content of the second seder wouldn’t have to be a repeat of the first, but could focus on the story that our tradition associates with the seventh day of Pesach: the Israelites’ crossing of the sea, accompanied by song and dance. We already have some of the music (e.g., Debbie Friedman z”l has written “Miriam’s Song”), and in time we’ll come up with new symbolic foods and other customs.

No matter how many days you celebrate, have a joyous and liberating Pesach!

Ben Dreyfus teaches physics and does physics education research at the University of Maryland.