Turn it, and turn it, for everything is in it. Reflect on it and grow old and gray with it. Don’t turn from it, for nothing is better than it. (Pirkey Avot chapter 5) Ben Bag-Bag.

At this time of writing, we are well into reading from the book of Deuteronomy. It is largely a farewell speech by Moses as the People of Israel are about to enter the Promised Land. Its title differs from the Hebrew Devarim which simply means Matters and connotes Divine utterances. The Western title Deuteronomy does indeed capture the theme of the book as well for the book is filled with repetitions, most prominently another version of the Ten Commandments. Readers are often perplexed by this repetition. I think of the apparent redundancy as consistent with the modern Hebrew saying – “I have already seen this movie!” A deeper look, however, will allow the reader to take note of subtle differences which offer some exquisite meanings not found in the previous version.

As we begin our calendrical sojourn to the High Holy Days in the late summer as our tradition bids us to do, I anticipate the liturgy in our Prayer book, the Machzor. The late Rabbi Richard J. Israel author of “the Kosher Pig and other Curiosities of Modern Jewish Life” told the anecdote of the Jew who was seen ripping out a page from the High Holy Day prayer book. Facing rebuke by another member of the community, he said: “It is my custom that the week before the New Year I rip out a single page out of our Machzor. Though I plan to live as long as Moses did, (120 years) there would still be thousands of pages left to omit even if I were to live to the age of Methuselah. (1000 years)

Our A.D.D, culture surely encourages brevity. Just consider the fifteen-minute segments in our regular TV shows punctuated by commercials and previews. In my youth my Rabbi would offer his High Holy Day sermon which would go on for at least forty-five minutes. What was the fifteen minutes introduction is now the standard length of any rabbinical talk. Any longer than that would prompt some members of the flock to point comically to their watch as a not too subtle reminder it was time to wrap things up. Fair enough as most of us in our culture do not have what Germans called Sitzfleish. Or as a modern quip would have it – “The mind can absorb no more than the seat can endure!” Many a Jewish visitor to Protestant Churches are impressed by the brevity of the service. Not so much at a full Catholic Mass in which you can likewise grow fungus by the time it is over. Our 24 hours Yom Kippur marathon does contain numerous repetitious prayers causing not a few eye-rolls when hearing Avinu Malkeinu yet once more.

The above quote by the rabbinic sage and disciple of Hillel the Elder some two thousand years ago is wise as it is ironic. He offers the imperative that we engage in repetition as you never know what things you may have missed the first time. Why ironic? Aside from this single maxim encouraging a second or even third look he is not mentioned any where else in the Talmud. His teachings were quite brief. My seventh grade English teacher told me that one would do well to re-read Huck Finn every ten years as we all have new eyes as the years pass. It is also the same for viewing classic films such as The Graduate. In my youth I saw Mrs. Robinson as a villainous character. As the years have passed, I now see her as a pained, almost sympathetic figure compromised by the choices she made in her youth.

Thoughts from our Rabbi 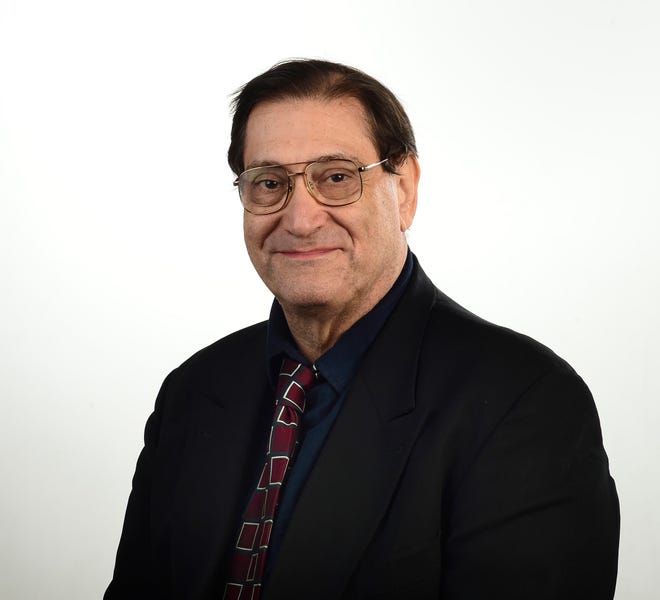 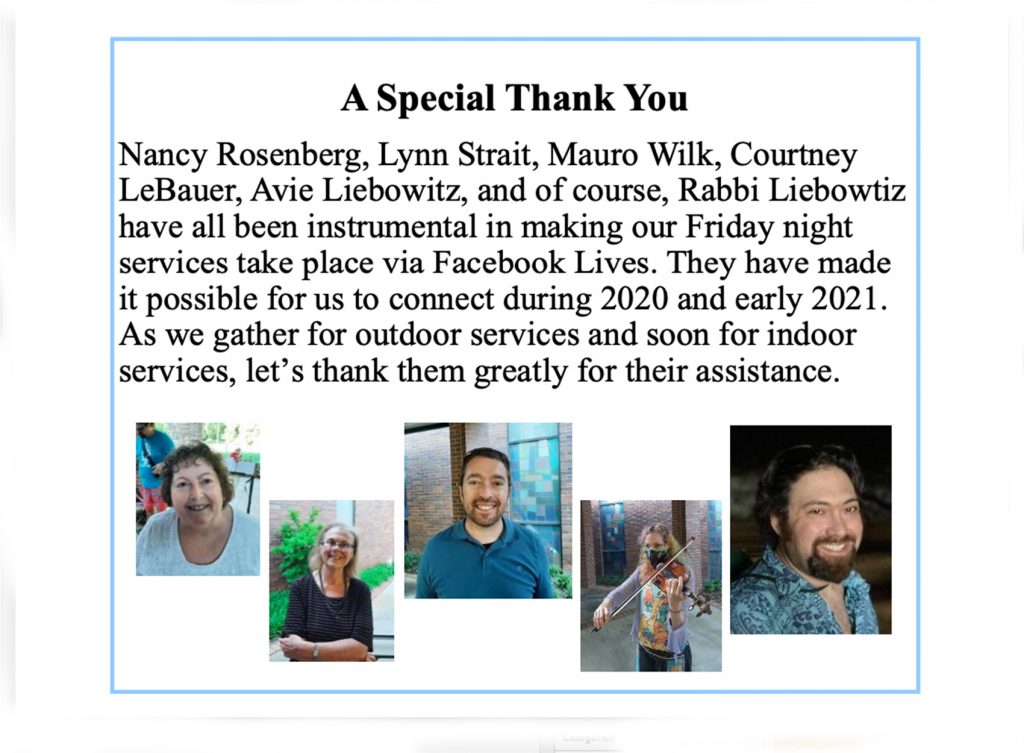 ourtemple29302 / From Our Rabbi, Jewish Life, News and Announcements, Our Congregation /

Each Shavuot marks for me (and I suspect for many colleagues) the end of the season. Not until Tisha B’Av a fast day in late July or early August will there be any holiday demands. Yet, we do look forward to our Friday night services which will be followed by dinner out for those who are inclined. Shavuot has taken on additional meaning as it coincided with the loosening up of Covid – 19 safety measures. (If you are inoculated.) As such, our outdoor services will give way to indoor once more, starting with our annual summer Lasagna Shabbat dinner.

I have already begun to cogitate about High Holy Day services which the Board will re- view in late summer for the safest way to proceed. Keep tuned!

In the meantime, we will continue with hybrid in house services with steaming, somewhat reluctantly as a certain habituation has set in. For some it is a convenience that has its upside and its downside. Such is the residue of what was a very, very difficult year.

In Yiddish there is an expression Shpilkes in Tuchus often shortened to Shpilkes. (My mother would often say when I was impatient; “Er haut a Bissel Shpilkes”). It was the linguistic equivalent of “ants in your pants” or “pins and needles” or simply fidgety. Shpilkes! As things have opened up there is a burst of activity due to the Shpilkes endured by millions.

Let us hope we never have to experience it ever again. 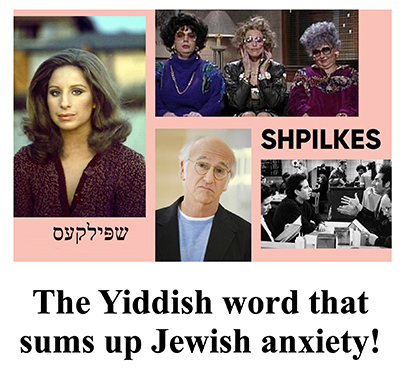 Please check Temple Topics and emails for updates on times and Covid guidelines for Shabbat Services and other Temple activities. 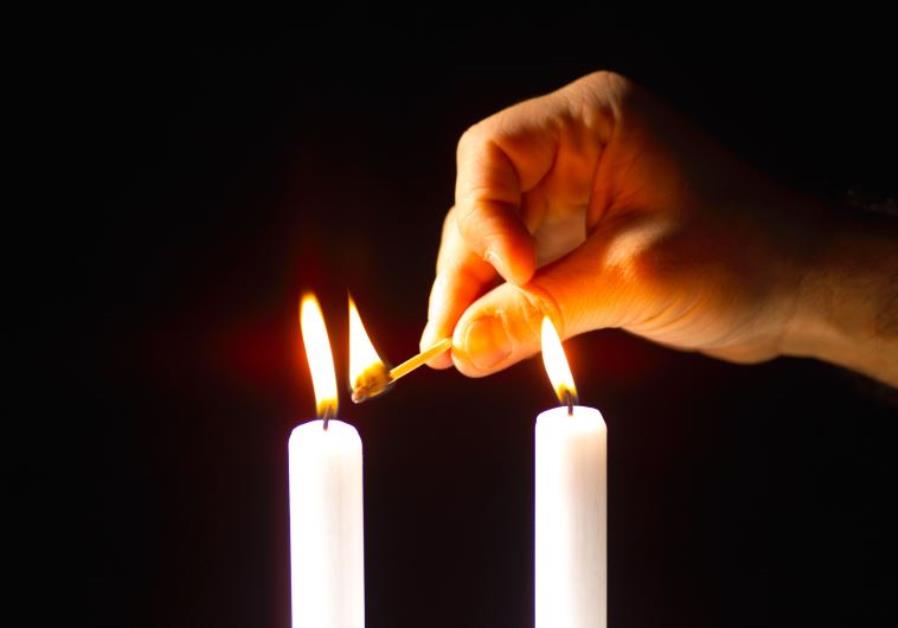 In the 1970’s there was a huge number of aspirants for the
rabbinate. For every single applicant to the Hebrew Union College, which
my seminary in Cincinnati accepted, there were three others that were
rejected. Some didn’t make it in because of the difficult psychiatric review
(one such applicant thought the rabbinate was a stepping stone to being the
Messiah), or because their intellectual acumen was deficient; or some
personal skills seemed to be wanting. At our Hebrew Ulpan in Israel it was inevitable that we would err in some embarrassing way as we labored in to converse in Hebrew. The usual quip of derision went; “Boy we would like to meet the other three candidates they re- jected instead of you!”

This of course leads me to think about the idea of being chosen. The academy awards are upon us in a modified Covid form this year. Nevertheless, the usual anticipations remain as to who will be the Best Actor, Best Actress and so forth.

Just a few years back to take away the sting of ruthless competition the new language, ever so politically correct went from Best Actor to Best performance by an Actor. Shel Silverstein (writer of The Giving Tree, and the song A Boy Named Sue) once reflected on winning with this poem:

As Shavuot is upon us this month, the Jewish people celebrate their “closeness!” We stood at Sinai, received the Ten Commandments, or according to one tradition all of the 613 command- ments. We became an “Am Seguah!” a treasured people to God. The book of Deuteronomy poetically concludes with a boast that when God decided the boundaries of nations, He/She began with Israel first. Over the years we have had to walk a narrow path between a triumphal posture of superiority (as in how many disproportionate Nobel prizes Jews win?) and a more modest view that being Jewish meant an embrace of responsibility (as in it hasn’t always been such an honor being chosen – the old jest, “Please God choose someone else for a while!).

We had a modest film night last month about Gefilte fish and Passover. (Thanks to Lorie Edder!) Delightful, poignant and sentimental, it reviewed the multi-generational annual Passover gathering of a rather large Jewish family whose roots went back over a century. The culinary preparations were both fun to watch and cringe worthy. Our cultural disposition seems to foster a relentless competitive urge to assert the best way to do this or to do that! (Especially when it comes to recipes and spices to use or not to use: that is the question!) Do think of that when you enjoy the annual Bible and Blintzes?

Tamping down the competitive impulse, the Prophet Amos announced:

“Are you not like the Cushites to me, O people of Israel?” declares the Lord. “Did I not bring up Israel from the land of Egypt, and the Philistines from Caphtor and the Syrians from Kir? Amos 9:7 All people everywhere have their gifts to celebrate. All of us are winners in one way or another. 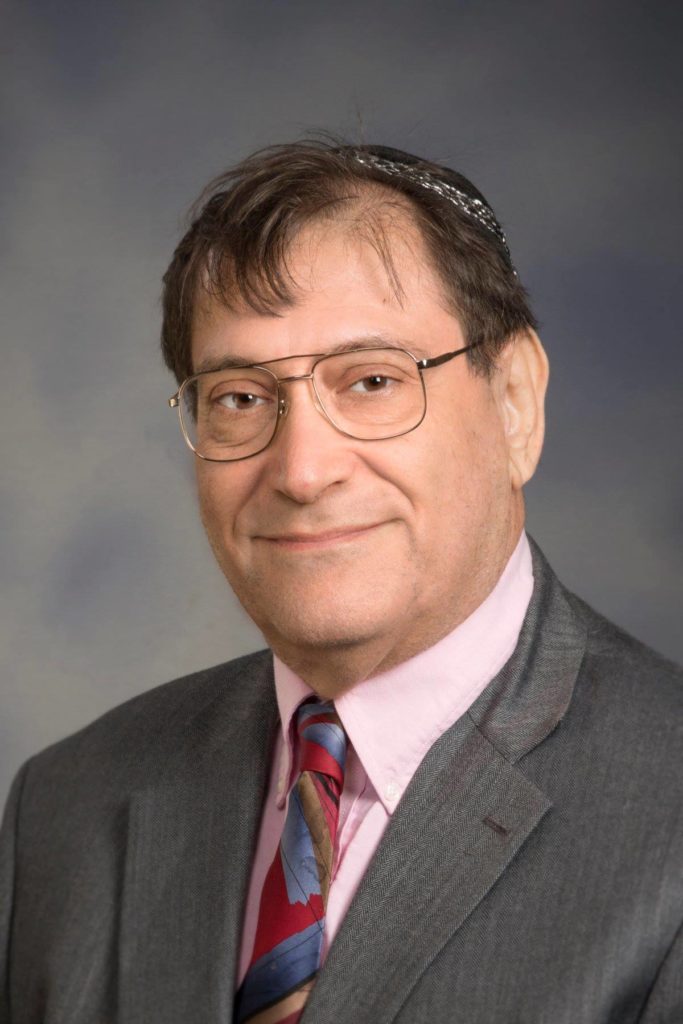 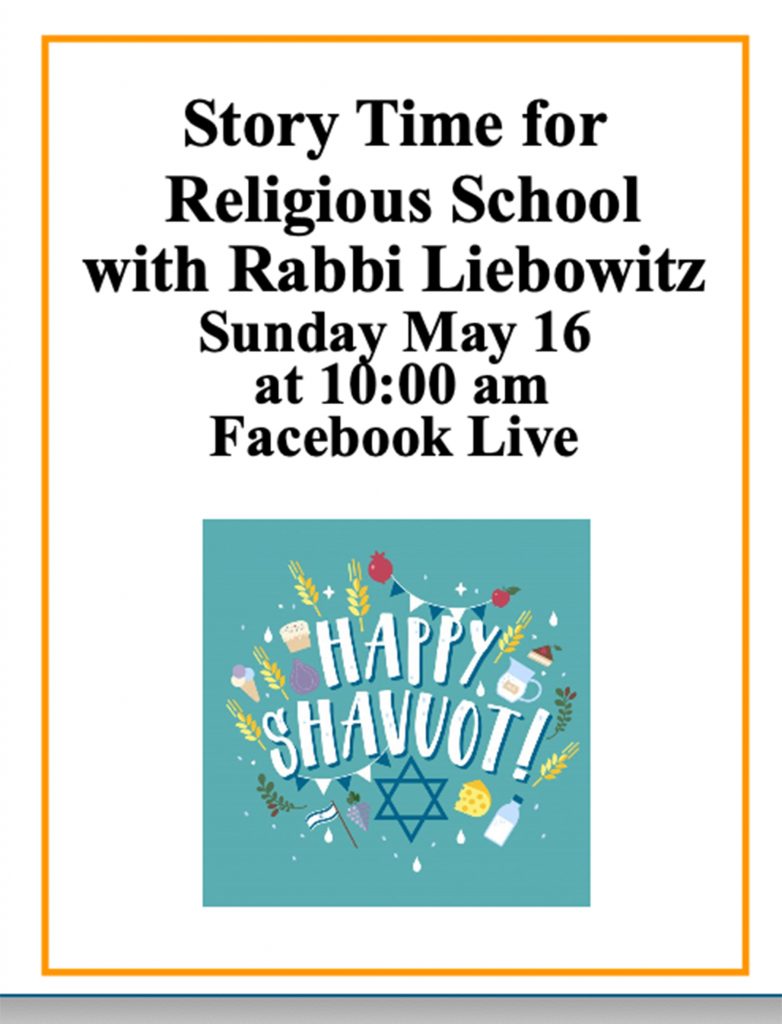 ourtemple29302 / From Our Rabbi, News and Announcements, Our Congregation, Worship /

Until further notice, services will be at 6:00 via Facebook Live on the Congregation B’nai Israel Facebook page. If you cannot make the “live” service, it will be available to watch any time at your convenience.

Simply go to the page at 6:00 and click on the live video to view.

Saturday morning Torah studies will be held via Skype at 10:00 am. Ask to join by becoming a contact by looking up Yossi Liebowitz on Skype. He will include you as a contact. 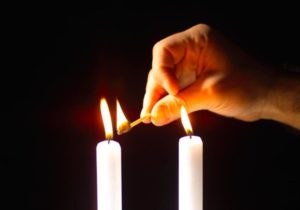 ourtemple29302 / Education, From Our Rabbi, Holidays, News and Announcements, Our Congregation /

My first year in rabbinical school was in Jerusalem, one year after the Yom Kippur war had ended. It was a sobering moment when on the anniversary of its conclusion the nation came to a standstill. As is done every year on Yom HaShoah, Holocaust Memorial Day, a siren was sounded for two minutes. Everything stops! Traffic, pedestrians at corners, shopkeepers! The weeks leading to that day were filled with re-burials for those who died in the Sinai and were interred in temporary settings. Nearly three thousand casualties in a small nation which proportionately in America would have meant millions!

A woman standing next to me spoke after the sirens went silent. She told me she had been a nurse on the Egyptian front, had witnessed the carnage. Despondently, she spoke of a soldier who was on life support lingering between life and death and how she wanted to withdraw the sustaining IV and let him die. “I feel that about the Jewish people,” she then remarked. “I had a family that was all but destroyed in the Holocaust. As with the Jewish people I sometimes think after this latest carnage that we need to pull the plug and end our existence. Let us at long last give up!” What response could you offer at such a moment? Who can judge that woman’s despair? Not I then or now!

April each year is filled with small observances that follow Passover but which are large in meaning: Holocaust day, Yom Hazikaron (Israel Memorial Day) and then Yom Ha’atsmaut (Israel Independence Day).

An Israeli member of the Knesset remarked: “That is how we do it: first a sad day of remembrance followed by the jubilance of independence. “ Somehow we find a way to persist. The news out of Israel is often dire. Newspapers tend to focus on the bad news, the injustices and excesses of the Jewish nation state, disproportionately so! One of the antidotes that I prescribe is a website Israel 21C. It is filled with happy reviews of Israel’s technological prowess, efforts for reconciliation and steps for peace. Such newsworthy items are eclipsed by the ugly realities of the Middle East. It provides us with some balance. Not to ignore any of the concerns that arise when we consider the poor machinations that befall any nation state which are by definition endemic! Hopefully not epidemic! 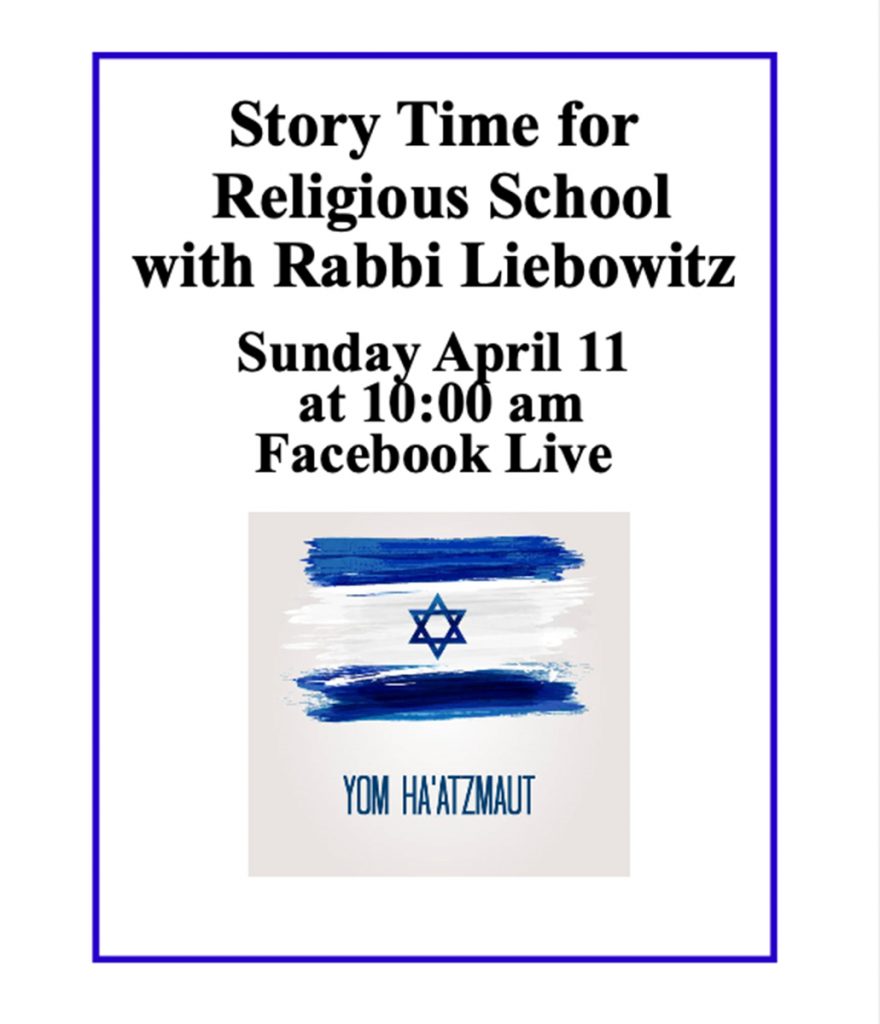