As a people of history it is essential to recall how it is we got from there to here; at times in celebration, at times in consolation. The review by one of my long time colleagues and classmates reviews the partition plan and the little the world hesitatingly gave our people after the Shoah, the Holocaust. 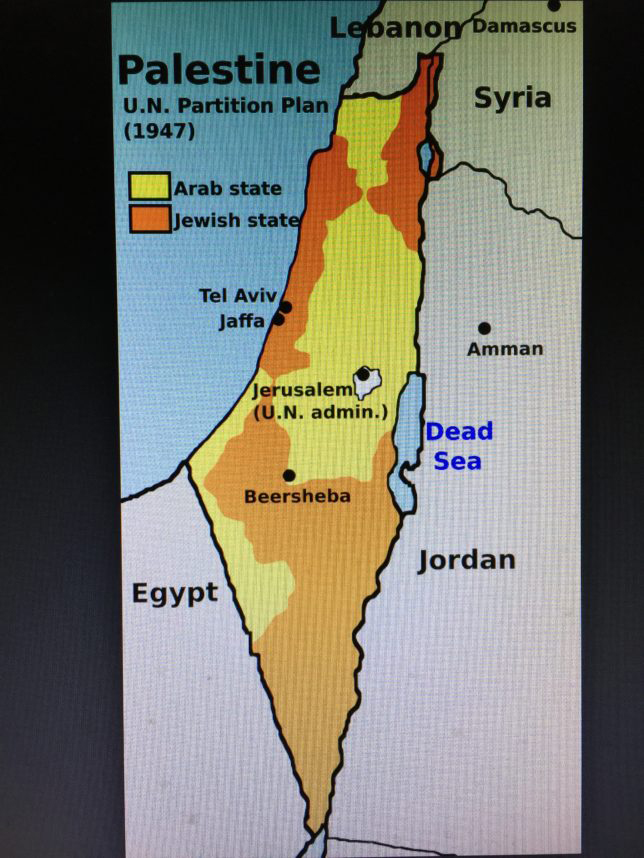 Seventy years ago today, November 29, 1947, the newly formed United Nations voted to partition Palestine into two states, one Jewish state and one Arab state. The Jewish people led by David Ben Gurion accepted the Partition Plan but it was rejected by all Arab States.

Rabbi Abba Hillel Silver, a leading American Reform Rabbi and Zionist from Cleveland, and the Director of the Jewish Agency for Israel, spoke to the United Nations. Among other things he said eloquently the following:
“… it is of course appropriate that it be clear – and I am sorry that messages delivered in recent days by certain representatives may confused what ought to be clear – that when we speak of a Jewish state we do not mean a racist or theocratic state; but a state which will be based upon full equality and full rights for all if its inhabitants, without any discrimination between religions or races, and without a takeover or enslavement …”

Rabbi Silver also spoke about the moral and practical necessity in the establishment of a Jewish state in Eretz Yisrael (the Land of Israel) following the horrors of the Holocaust that had ended only two years before. At the same time, he emphasized the human lesson from those years:
“… We are an ancient people, and even though we frequently experienced disappointment in the long and hard road we’ve traveled, our hearts have never dissolved. We have never lost our belief in the superiority and victory of grand moral principles. In the recent tragic years, when the entire house of Israel turned into one big house of torment, we could not build what we have built if we had not placed our safety in true victory…”

Here, Rabbi Silver speaks about the role of American Jewry in the building of the future Jewish state:
“American Jewry is obligated – to itself and to the entire nation – to completely accept upon itself the burden of scripture and the historic future of Judaism. This grand responsibility will have to gain strength from within itself. It cannot once again depend on the table of the old world… to our satisfaction, American Jewry holds great human material, filled with belief and pride and a sense of responsibility… with which we can strengthen the foundation of the central and necessary institution in Jewish community life – the synagogue, which also a school. It is our duty to strongly emphasize the importance of Hebrew language and literature education. Without the study of the Hebrew language, American Jewry will be destined to spiritual infertility…
If Jewish destiny is placed in the hands of Jews for which Judaism is only a result of persecution, chance or a random gesture of kindness, it will surely sink into ignorance and indifference… if the steering wheel is left in the hands of Jews whose Judaism is an inner necessity, a covenant in their soul, who wish to continue to path of Jewish glory – both people and culture – only then can we be sure that the necessary institutions to enrich our lives, most importantly the synagogue and school – and particularly the school – will be established.

This link includes a speech given by Rabbi Silver before the United Nations on November 29, 19487 beginning at two minutes and thirty seconds to nine minutes and 40 seconds. You can hear, as well, the roll call vote of the nations voting on the Partition plan beginning at 11 minutes and 50 seconds.
The final vote was 33 to 13 with 10 abstentions in favor. The map as determined by the partition plan can be seen here and there is also a link to what countries voted for, against and abstained.

« 7 Israelis Who Have Made a Deep Impact on Life in the U.S. » Save the Date! Linda Ott will be Speaking on Tuesday, December 5th.